Father Marquette’s circumstance is pronounced in his natal chart. Saturn conjunct the Ascendant in his Saturn-ruled first house provided him with a serious and sincere disposition. With Jupiter trine Saturn, people may have trusted him instantly upon meeting him. But, was he someone who could heal with his hands?
To determine this, I looked at the charts of four known healers from the  Astro-Databank website. My selection of whom to include in the analysis was based on corroboration of claimed healing ability.
The data in the second column of the table below is from the chart of Wirkus Mietek, a Polish Catholic healer who was certified as such by his government. The third column lists data from the chart of Stephen Turoff, a Psychic-Surgeon. Data from the chart of Padre Pio is in the fourth column. Pio was an Italian healer, Capuchin Monk, and stigmatic. The fifth column contains data from the chart of Greg Schelkun, a Psychic healer. 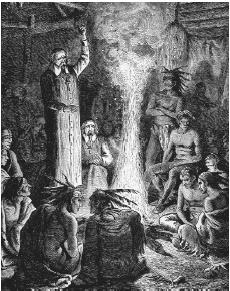 All of the four healers have planets in the 12th house, Father Marquette does not. The 8th house is said to show psychic ability, but I did not find consistencies across the healer charts supporting this assertion. Planets in the 12th house look to be the best indication of psychic ability.
Marquette’s Saturn moved to his 12th house by progression around 2 years of age and remained there for the rest of his life. I do not think this would have given Marquette the ability to heal as Saturn represents earthiness and being grounded. The lightness needed for interaction with other levels of consciousness was not there.  I think his Jupiter and Moon in the 8th house indicates his spiritual rapture was geniune to the extent of affecting other people who wanted to share in what he was experiencing. I do not believe he was able to heal with his hands even if he experienced elevation during his illness. My conclusion is that Matson’s account is not accurate.
Another version of events, also based on oral history can be found on the Encyclopedia of Chicago website. Author, R. David Edmunds states:

In 1673 Father Jacques Marquette and trader Louis Jolliet passed over the Chicago portage from the Des Plaines River, and the following year Marquette and two companions spent the winter at a bivouac on the Chicago River, where they obtained food from hunting camps of Illinois Indians and from two French traders who recently had entered the region.1

It is not likely that evidence will be found at this point to shed light on the subject. The area where Marquette and his companions are believed to have built a cabin is now Sanitary and Ship Canal district.

The native American Indians were familiar with the area, which was the eastern end of the portaging route that was called Portage de Checagou (or Portage des Chenes) by early French explorers. Jacquez Marquette and Louis Jolliet passed through the portage in 1673. Marquette returned the next season and spent the winter here — this spot is thought to be near present-day Damen and what was at one time the West Fork of the South Branch of the Chicago river (now the Chicago Sanitary and Ship Canal).2

1. Chicago in the Middle Ground – http://encyclopedia.chicagohistory.org/pages/254.html
2. Bridgeport: Before the Canal: Early History – http://www.uic.edu/orgs/LockZero/i.html