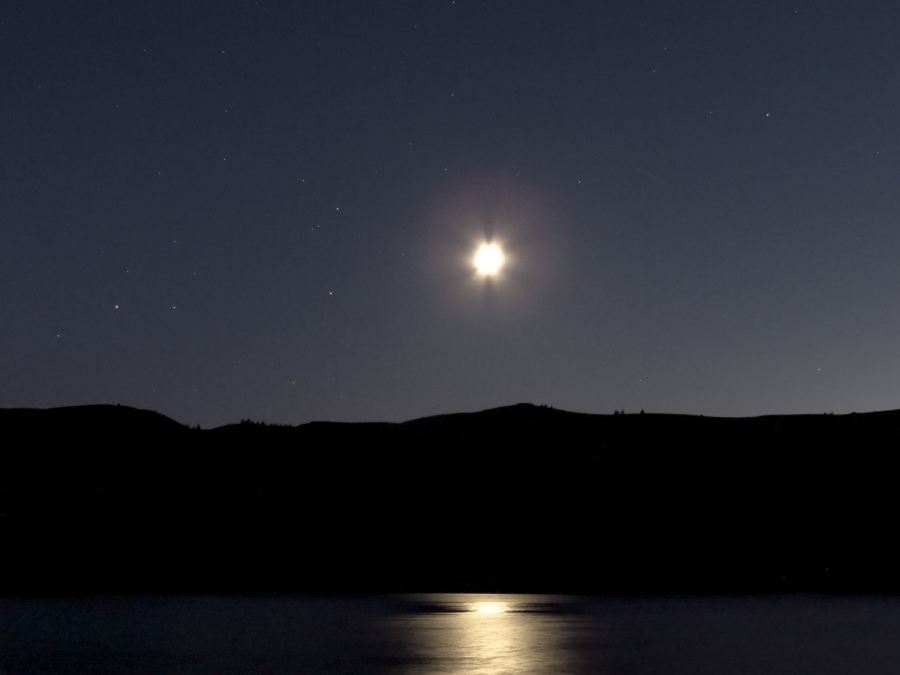 I was checking out Facebook before I planned to shut down my computer when I saw mention of Tiangong-1, the Chinese space station that is on its way back to earth. Someone commented that the scenario reminded him of Skylab. I said to myself, “Skylab? Didn’t Slyvia Delong write about Skylab in her Horary book?” After seeing that Michigan is in a state of emergency about Tiangong-1, I decided to ask a question and use Slyvia’s method to decide the answer. First, here is the excerpt from Slyvia’s book. 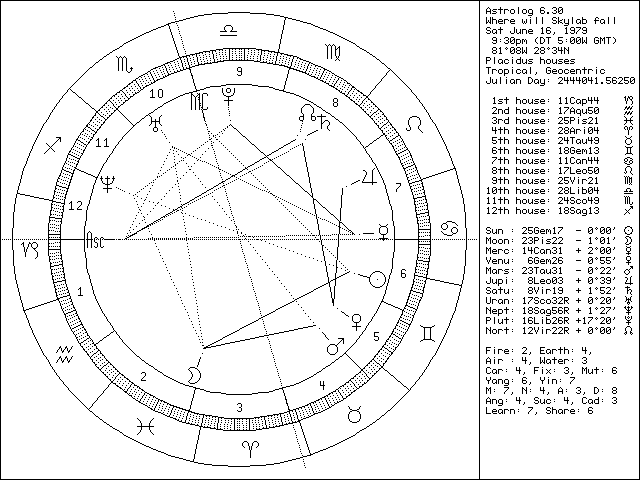 I had planned a week’s vacation on Florida’s west coast to commence July 9, 1979. The media had been alerting us of Skylab’s descent and approaching fall and, although the date of its crash was still uncertain, I was concerned about leaving our home in the event Skylab’s debris would fall in our area.
The above question was asked and the chart cast, not having a ghost of an idea how I would read it, since we have no precedent from older authorities for such a question. Again, the chart would have to “lead me.”
There was no house we could assign to Skylab. Since this was a horary chart and not an event chat, I had to be Saturn, ruled by the Ascendant, with the 4th hose my home.
The natural ruler of the falling space laboratory had to be ascertained first. Reasoning that its ruler must be one of the “malefics” since it had potential for considerable destruction, I considered Mars, Neptune, Uranus, and Pluto, narrowing it down to Uranus or Pluto.
Uranus would rule airplanes and electrical instruments, but Skylab was more than an airplane. I decided on Pluto, due in part to the fact that when I was doing work on various space shots in the late ’60s-’70s for the Brevard County newspaper I had found that Pluto was usually prominent. Pluto relates to space and the highest form of scientific technology. It is interesting that Pluto was on the Ascendant of the chart of Wernher von Braun, father of our space program. Pluto was in the ascendancy for the Apollo 11 shot of July 16, 1969. which took our astronauts to the Moon.
In the horary chart Pluto was in the 9th house. Skylab would fall a long distance from our home. Since Pluto was not in a water sign, Skylab would not fall in the water; therefore it had to fall on land. It would fall in a foreign country (9th house). The 9th house is southwest and Libra is west, so it would fall in a foreign land, southwest or southwest by west of Florida.
Checking a world map, the only foreign countries southwest of us would be in Central America or Australia. Reasoning that since it was not to fall in the water, a large land mass such as Australia would be the more probable landing spot. The fact that Australia is located in South latitude was another plus for it becoming a spot in space history. Finally, from Florida, Australia was certainly much farther away (9th house) than Central America.
I felt certain it would fall far away – in a foreign land Southwest of us. I was less certain about the country, but gave greater preference to Australia.
Feeling confident that Skylab would not pay us a visit and find on-one at home, we left for our holiday. From our motel room TV we watched the last-minute reports of Skylab as it lighted up the night like a train in the sky over Perth, and fell on Australia.

Now, take a look at my chart. Can you believe it? 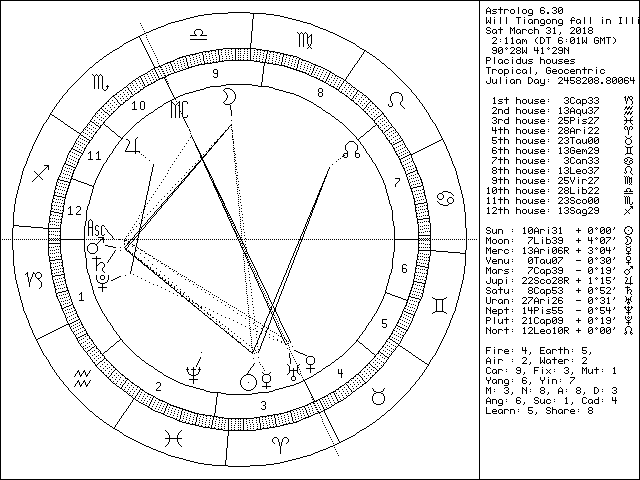 Following the method Slyvia outlined, I am Saturn, ruled by the AC. Saturn is in the first house. I usually interpret that as an automatic no and a possibility that I may misread the chart. Considering that Mercury is retrograde, it increases the chance of a misinterpretation, but I will do my best.

Pluto is in the 1st house in Capricorn, an earth sign. Since it is not in the 4th house, it will not fall on land in Illinois. It is not in the 9th house of foreign land either as it was in Slyvia’s chart. It will fall somewhere in the United States. The 1st house is east and Capricorn is South; a state east and south of Illinois.

Mercury was forming a square to Pluto in Slyvia’s chart. This aspect suggests some type of transformation involving communication. However, no injuries resulted from Skylab’s fall.

Retrograde Jupiter is making a sextile to Pluto in my chart. Sextiles are easy aspects, so I do not think any injuries will result from Tiangong’s fall. 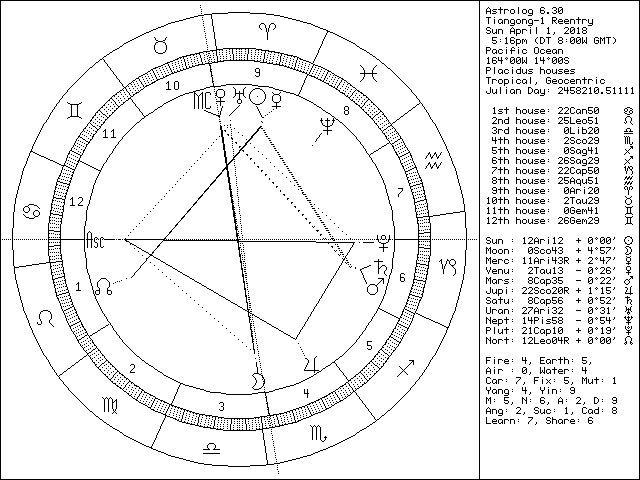 Joint Force Space Component Command confirmed that Tiangong-1 reentered the atmosphere at 5:16 PM PST over the southern Pacific Ocean. This means that the method I used produced results that were wrong on all counts. It was not in the United States, it was not on land, and it was not Southeast of Illinois. Since I learn sometimes from going backwards, I wonder if there were any indications in the chart that would have led to the actual results.

Capricorn pointing south was correct, but its quality as an earth sign was not. Jupiter was forming a sextile to Pluto and is in a water sign. The aspect is separated by 1°19′. Reentry was a little over a day and one half from when I asked the question, so this checks out. Virgo is South by West, Gemini is West by South, and Libra is South. No planets are in Virgo and Gemini, but the Moon is in Libra in the 9th house of foreign places. The 9th house points South Southwest.

The Moon rules the 7th house, which is interesting. In the Chelyabinsk chart (see below) Pluto is in the 9th house and is the modern ruler of the 7th. One chart is a horary and the other is an event. I wonder…. This requires more thinking and research. 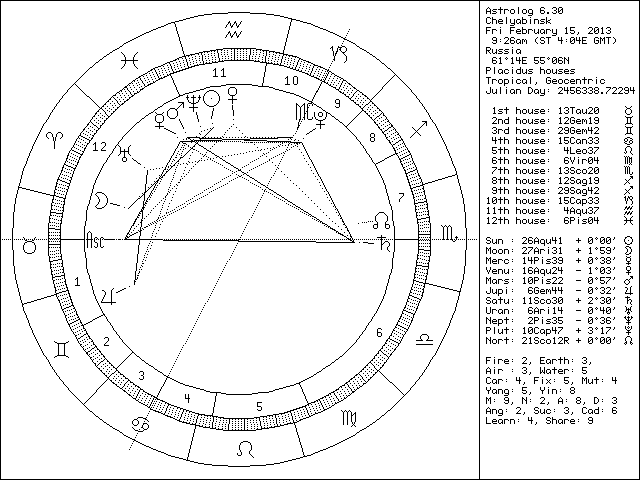